In Eastern Europe many countries celebrate many “prazniks” (holidays) according to the Orthodox calendar.  One of these is Christmas is on Jan 7.  Below are a few stories from Ukraine, both from our SEND missionaries there and a post from a member of Sumy Grace Church.

On the evening of Jan 4, 2015, Judy and I went to a mall in Kyiv as we had a note from a friend that there would be a flash mob there. After a delicious Ukrainian meal at the food court, we received a text message that the performance was soon to start. A choir of at least 70 people from at least two Baptist churches began singing. They were on the lower floor of a three-story atrium and filled the mall with beautiful harmonies. They sang several Christmas songs including Silent Night and a few traditional Ukrainian carols.

A huge crowd gathered at the balconies on all three levels to listen. At the end, the crowd gave a round of ovation to the singers. This was one small way to lighten people’s spirits in this troubled land and to share a message glorifying to Jesus Christ our Saviour just a few days before Orthodox Christmas.

We have an English Sunday school program, as part of our church outreach program to families.  One of Michael’s classmates came last week and heard the Christmas story for the first time.  I told them this story was true and happened, unlike stories we hear (spiderman, Cinderella).  He went home and asked his mom, if it was true and really happened.  They came for lunch that afternoon and she shared how she told him that it really did happen.  Pray for this family to believe in Jesus.

Jan. 7 about noon, the doorbell rang. When we answered, there stood two young carolers asking permission to perform for us. They sang a very beautiful song in Ukrainian and, although we didn’t understand all the words, the ones we did understand were about the birth of Christ, the kings (wisemen or magi) welcoming Him, the angels singing and the shepherds playing. (Okay, the Bible does not talk about the shepherds playing anything.)

January 7th about 12:00 noon the doorbell rang. When we answered the door there were 2 young carolers asking permission to sing for us. They sang a very beautiful song in Ukrainian and although we didn’t understand all the words, the ones we did understand were about the birth of Christ, the kings (wisemen or magi) welcoming Him, the angels singing and the shepherds playing. (Ok, the Bible does not talk about the shepherds playing anything.) In Ukraine, “carolers” may sing or recite poetry and they may come on Christmas Eve day (Jan. 6th) or Christmas (Jan. 7th) and they expect to be rewarded with small gifts. We were ready with the candy!

We were happy to hear their song about Christ’s birth and we hope they have heard the Biblical account of that miraculous night, but, statistically speaking, that is unlikely. Only 3% of Ukraine’s population of 44 million people know Christ personally. The 2 girls who sang for us were about 7 and 9 years old. 25% of Ukrainians are under the age of 25. Please pray for God to send workers to share the good news about Jesus with the youth and children of Ukraine!

This year’s winter camp at Sumy Grace Camp in Ukraine was amazing. The majority of the teens weren’t believers and came from difficult backgrounds. Several were from a local center for teens whose parents can’t take care of them. Honestly, we were a bit anxious about this crowd, but once again God’s glory overpowered us as we walked in obedience to Him.

The atmosphere of the camp — whose theme was how to face living in the end times — was one of joy and deep interest in the Lord. Many of the teens became highly engaged in the Bible lessons, so much so that they often talked about the lessons with each other throughout the day. They also learned a great deal about prayer as God answered their prayers for their families and other situations while they were still with us.

We especially praise the Lord that several of the teens who had never been to church before came to our youth service on the Sunday evening after camp ended. This was a real blessing to those of us who had served. Please continue to pray for these teens as they seek God’s truth for their lives.

A few days after camp, the staff met to debrief. We spent a few hours discussing how it went and praising God for working above and beyond all of our expectations. This camp impacted lives for eternity.

Sumy Grace Church Winter Camp “In the Twilight of Empires”

During the New Years winter vacation period for a number of years “Sumy Grace Church” has held a teen winter camp at Grace Camp. The beginning of 2015 was no exception, as from January 5 to 9 teenagers could go on an exciting winter’s journey. The theme of this years winter camp  “In the Twighlight 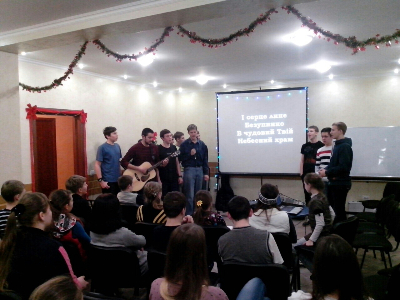 of the Empires” – Biblical truth about the end times here on earth, what is and what we can expect. About 30 teenagers and children came to the camp to learn more about Jesus, His second coming and Christmas. Through this time they participated in the daily Bible studies and evening worship services, as well as personal contact with the leaders. Many of the teens learned about/heard about the Gospel.  The teens also had the opportunity to participate in sports and other games, do crafts, learning to bake, play table football and air hockey, to participate in the services, and of course … eat.